One day while my daughter Ada and I were setting up to paint the plants in our small garden I had a thought. As I looked down at the paper it occurred to me that maybe we had somehow been drawn there by the paper itself. That perhaps the tree that it was had a memory it wanted to express and we were there to bring it into being. We then spoke of what the life of the former tree may have been like. How it reached both above to the sun and down to the earth below for its nourishment. How it drank the water from rain that may have come from a lake on the other side of the planet. Did the water prefer being part of a cloud, an ocean, a lake or a dew drop? We wondered if the tree that it was liked the sounds of the birds as much as our plants seemed to. We marveled how it and the garden gave without asking for anything in return. As we moved along in the painting we noticed a plant that was not doing well from others blocking the sun. Some more questions arose. What would it feel like to be without the things that nourish us? How can children bring out their gifts like the plants bring their flowers if they aren't nourished? 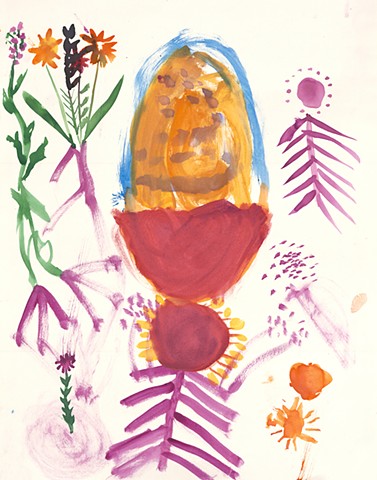